Headquartered in Clinton, the Coharie Indian Tribe descends from the aboriginal Neusiok Indian Tribe on the Coharie River in Harnett and Sampson counties. The community consists of four settlements: Holly Grove, New Bethel, Shiloh and Antioch.

The Coharie have approximately 2,700 members with about 20 percent residing outside the tribal communities. Early records indicate the tribe sought refuge from hostilities from both English colonists and Native peoples, moving to this area between 1729 and 1746 from the northern and northeastern part of the state.

Eastern Band of the Cherokee Nation

The Cherokee people believe the Creator brought them to their home in the Mountains of western North Carolina. Their first village site is the Kituwah Mound in Swain County. It was there that the Eastern Band of the Cherokee Indians formed a government to oppose the removal of the Cherokee Nation from the east, known as the Trail of Tears. Members of the Eastern Band remained in North Carolina after their kinsmen were forced west to Oklahoma.

Today, the only federally-recognized tribe makes their home on the 56,000-acre Qualla Boundary, adjacent to the Great Smoky Mountains National Park. There are more than 16,000 enrolled members with over 60 percent living on the Boundary. The Qualla Boundary includes the town of Cherokee, as well as several other communities. Cherokee is home to Harrah's Cherokee Casino Resort, one of Cherokee's largest employers.

The Haliwa-Saponi tribal members are direct descendents of the Saponi, Tuscarora, Tutelo and Nansemond Indians.

At 3,800 members, the Haliwa-Saponi Indian Tribe is the third-largest tribe in the state. The tribe resides primarily in the area traditionally known by the elders as "The Meadows," which encompasses most of the southwestern part of rural Halifax County and the southeastern part of rural Warren County. Tribal members also reside in the adjoining counties of Nash and Franklin.

The Haliwa-Saponi Powwow is the oldest powwow in the state, typically held in April.

The Lumbee Tribe is the largest tribe in North Carolina, the largest tribe east of the Mississippi River and the ninth largest in the nation. The Lumbee take their name from the Lumber River originally known as the Lumbee, which winds its way through Robeson County. The more than 55,000 members of the Lumbee Tribe reside primarily in Robeson, Hoke, Cumberland and Scotland counties. Pembroke is the economic, cultural and political center of the tribe.

The ancestors of the Lumbee were mainly Cheraw and related Siouan-speaking Indians who were first observed in 1724 on the Drowning Creek (Lumbee River) in present-day Robeson County. In 1887, the state established the Croatan Normal Indian School, which is today the University of North Carolina at Pembroke. A variety of enterprises including an industrial park, farming, small businesses and the University contribute to the economy. 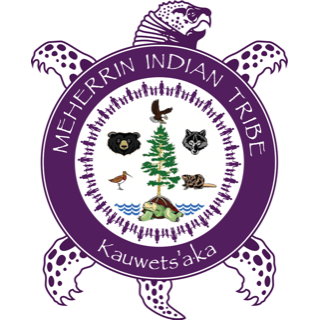 Meherrin refer to themselves as Kauwets' aka, "People of the Water." They share language, traditions and culture with the Nottoway and other Haudenosaunee Nations. In 1677, all Nations in Virginia signed the Middle Plantation Treaty. However, Meherrin Chief Ununtequero and Next Chief Horehannah were the last two to sign the Treaty in 1680. Shortly thereafter, the Meherrin Nation left their ancient villages of Cowinchahawkron and Unote and eventually moved into present day Como, NC. The last known village, "Old Town Maharinneck," was on Meherrin Creek known today as Potecasi Creek, is within walking distance of the present day Meherrin Tribal grounds where the annual pow-wows are held. The Meherrin are the only non-reservation Indians in NC who still live on their original Reservation lands.

Occaneechi Band of the Saponi Nation

The Occaneechi Band of the Saponi Nation is located in Alamance, Caswell and Orange counties, with Tribal Grounds located in the Little Texas Community. At 1100+ members, the Occaneechi are the smallest of the officially state-recognized tribes, but its members are active in their community and in statewide Indian events.

The Sappony have made the Piedmont Highlands their home for countless generations.

Today, the tribe's 850 members comprise seven core families, or clans, and live along the border of North Carolina and Virginia known as the High Plains. In the early 1700s, when the Sappony children were attending school at Fort Christanna and the tribe was guarding the frontier for the colonies, they were also helping to mark the North Carolina-Virginia border. As a result, part of High Plains is located in Person County, N.C., and part is located in Halifax County, Va.

The tribe is actively pursing initiatives in the areas of economic development, education and cultural preservation.

The Waccamaw, historically known as the Waccamassus, were formerly located 100 miles northeast of Charleston, S.C. After the Waccamaw and South Carolina War in 1749, the Waccamaw sought refuge in the swamplands of North Carolina.

The present day Waccamaw Siouan Tribal Office is located in Columbus and Bladen counties. The community, consisting of more than 2,000 citizens, is situated on the edge of the Green Swamp about 37 miles west of Wilmington, seven miles east of Lake Waccamaw and four miles north of Bolton.

^ Top of this page