The N.C. Office of Justice for Sterilization Victims provides justice and compensate victims who were forcibly sterilized by the State of North Carolina. The office functions as
a clearinghouse to assist victims of the former N.C. Eugenics Board program and thereby serves as the primary point of contact for victims, potential victims and the general
public who are seeking guidance about North Carolina’s former sterilization laws and program. During 2011 and 2012, office staff also supported a separate Gubernatorial Task
Force established under Executive Order 83.

By General Statute § 143B-426.50 the Office of Justice for Sterilization Victims was created to assist an individual with filing a claim for compensation and to plan and implement an outreach program.

The concept or term eugenics refers to the intentional and selective breeding of humans and animals to rid the population of characteristics deemed unfit by those administering
this practice. In the U.S., eugenics was carried out by individuals, nonprofit organizations and state governments that felt that human reproduction should be controlled.

Sterilization is a medical procedure or form of birth control that leaves a male or female unable to reproduce or conceive children.

How was eugenics administered in North Carolina?

The N.C. Eugenics Board program was created by the legislature in 1933 after a 1929 state sterilization law was ruled unconstitutional by the N.C. Supreme Court. The program
was a part of the former N.C. Department of Public Welfare and petitions for sterilization were considered by a five-member panel of state officials. In the late 1940s, the
Department of Public Welfare began to promote increased sterilizations as one of several solutions to poverty and illegitimacy.

How many victims have been affected by the N.C. Eugenics Board and how many are alive today?

Between 1929 and 1974, an estimated 7,600 people were sterilized by choice, force or coercion under the authority of the N.C. Eugenics Board program. The exact number of
victims alive today is unknown. However, the State Center for Health Statistics estimates that 2,944 victims may be living as of 2010. 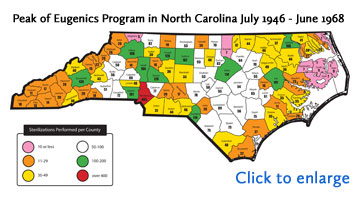 Yes. All 100 counties in North Carolina participated in the program. Some counties were more active than others in the sterilizations that were performed. See where your county of residence ranked for the number of sterilizations performed
Sterilizations Performed by County

Was eugenics legal in North Carolina?

North Carolina law during the eugenics period endorsed sterilization of people who had epilepsy, sickness, “feeblemindedness” and other disabilities. Eugenics was a popular movement, especially prior to the World War II, and other states had similar programs. However, North Carolina was the only state that allowed social workers to petition for the sterilization of members of the public. These local social workers would petition the
board to sterilize a person, and the board would make the final decision. Over 70% of North Carolina’s sterilization victims were sterilized after 1945 in contrast to other states
that conducted the majority of their sterilizations prior to World War II and 1945.

If I believe that I or someone in my family may have been sterilized under the N.C. Eugenics Board program, what should I do?

Persons who feel that they may have been sterilized under the authority of the N.C. Eugenics Board program between 1929 and 1974 should contact the N.C. Office of Justice for
Sterilization Victims’s Information Line at 1-877-550-6013 (toll free in North Carolina) or 919-807-4270. Callers seeking to have their names checked against Eugenics Board
program records can download a Claim Form to complete and return. Persons impacted by this program were born in or prior to 1961.

Where can I look for more historical information about North Carolina's eugenics program?